Tuesday, Jul 31, 2018
6 minute read
Collaborate
The blog is managed and hosted on GitHub. If you wish to update the contents of this post or if you have found an inaccuracy and wish to make corrections, we recommend that you please submit a pull request to this repository.

Apereo CAS has had support to delegated authentication to Microsoft ADFS for quite some time now. This functionality, if memory serves me correctly, started around CAS 3.x in form of an extension which then later found its way into the CAS codebase as a first class feature. Since then, the functionality more or less has evolved to allow the adopter less configuration overhead and fancier ways to automated workflows.

The story is actually quite simple: The integration between the CAS Server and ADFS delegates user authentication from CAS Server to ADFS, making CAS Server an ADFS client. Delegation of course is just a fancy word that ultimately means, whether automatically or at the click of a button, the browser is expected to redirect the user to the appropriate ADFS endpoint and on the return trip back, CAS is tasked to parse the response and extract claims, etc in order to establish an authentication session, issue tickets, etc. In other words, in delegated scenarios, the main identity provider is an external system such as ADFS in this case and CAS simply begins to act as a client or proxy in between.

In the most common use case, CAS is made entirely invisible to the end-user such that the redirect simply happens automatically and as far as the audience is concerned, there is only the external identity provider (i.e. ADFS) and the target application that is, of course, prepped to speak the CAS protocol. This is important note to consider: target applications are CASified applications. While the end-user just interacts with ADFS and the application, the application itself only interacts with CAS since of course, CAS is proxying the workflow in between. The application should not have to care about the source of the identity information and the intricacies of data extraction from various identity providers. It cannot. Its sole concern is to speak the CAS protocol and exchange a service ticket with the CAS server for the right stuff that CAS may have gathered from any number of sources.

Of course, you and I know that source could very well be ADFS; but that’s just between you and me…and let’s keep it that way!

Usage Warning
If you are trying to figure how you may log into ADFS while CAS plays the role of a SAML2 identity provider, you are in the wrong place. Please read this post instead.

The Cutting Edge
Note that as of this writing today, CAS 6 is very much in development and is not officially released. While the functionality and instructions noted here, more or less remain the same for CAS 5, you may want to take steps described here with a pinch of salt, and of course as always, shake well before use.

The initial setup is in fact super simple; as the documentation describes you simply need to add the required dependency in your overlay:

…and then in your cas.properties, instruct CAS to hand off authentication to ADFS:

A few tips for the enlightened:

If you are interested to learn more about the settings, I recommend checking out the CAS commandline shell or better yet, use the CAS administrator dashboards to look up documentation and configuration metadata by querying for settings.

I wish this section was more about how certain ADFS claims begin to start a revolution, rise up against the X-Men and transform into evil giant XML blobs on demand to wreak havoc but sadly, the topic here is much more boring than that.

As ADFS claims are released to CAS, you are here given the opportunity to transform and mutate those claims and attributes before they are packed into the CAS-enveloped authenticated subject. You can add or remove attributes or more commonly change and sanitize values for certain claims. To do so, CAS provides you with a brand-new option to implement said transformation rules as a Groovy script whose path may be taught to CAS as such:

…and of course, the script may look like this:

So, we are getting a bunch of claims or attributes from ADFS and are tasked to simply return a map of keys and values. In my example above and regardless of what ADFS delivers to CAS, I decided to only stuff the upn attribute into that final map with a single value that is Wolverine. Of course, since upn is designated to act the username claim, the ultimate CAS principal will be established under the username Wolverine.

…without the claws, certainly, though that is possible too.

A relying party trust needs to be created in ADFS for urn:cas:mmoayyed:

Make sure you set the relying party identifier(s) correctly: 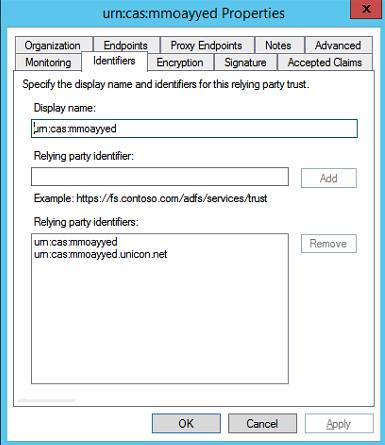 Make sure endpoints are defined: 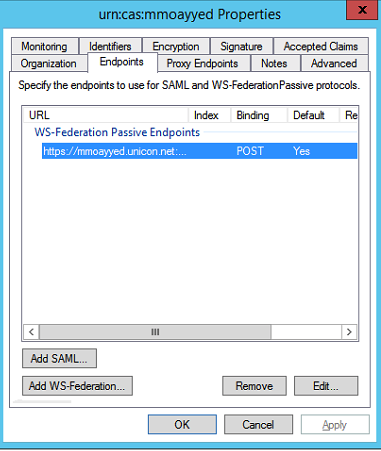 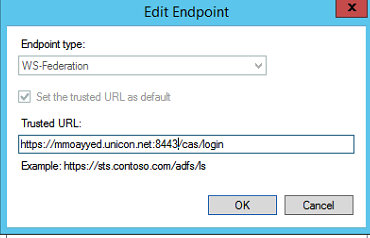 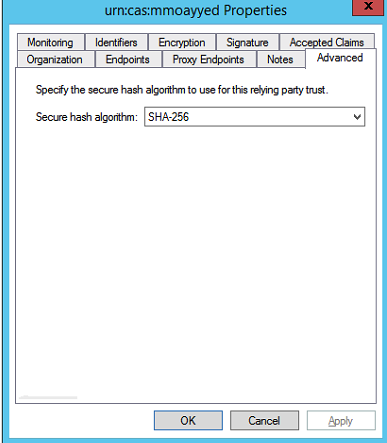 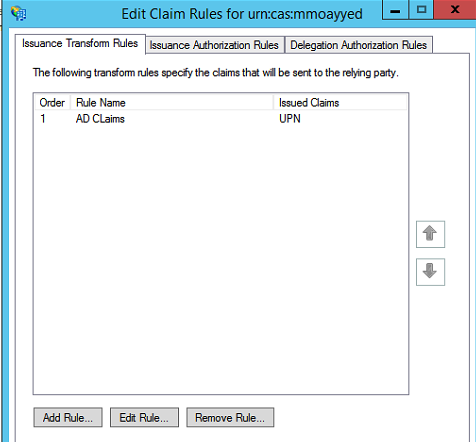 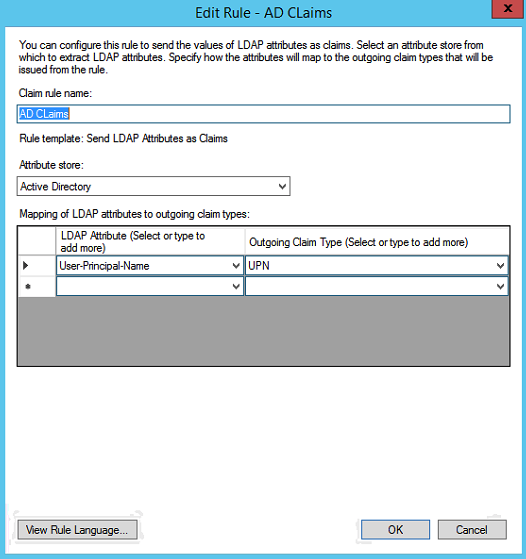