If you contribute a fix or new feature to CAS you either need to use a snapshot build, wait for an official release or publish your own release to a private repository. In my situation I work somewhere that uses Gitlab for CI/CD and has a private repository that is not accessible to Github CI/CD and I didn’t want to figure out how to run a Github private runner since I am already using Gitlab private runners.
By using Github Actions to build and publish CAS, but pushing the release to a cloud hosted private repository such as are available from AWS, Azure and Github, I am able to build a CAS release at any time from my fork and my private overlay can be built in Gitlab using privately published artifacts from one of the cloud hosted repositories. I prefer not having my CAS fork deviate from the main project (keeping any customizations in the overlay but usually contributing them back) so I added Github Actions workflows to CAS 6.4+ that make it easier to publish a tagged release from a fork to a private repository. One workflow is for publishing to a private AWS CodeArtifact repository, another is for publishing to the GitHub Packages repository, and a third workflow can publish to an Azure Artifacts repository, but the Azure Artifacts workflow is generic enough that it could be used to publish to a private Nexus or Artifactory repository if it were accessible.

All three workflows only trigger on a four digit Git tag starting with a 6 or 7 (e.g. 6.4.0.1). The four digit version differentiates the version from an official CAS release. These releases will be in your own repository where they should not conflict with other resources in other repositories. When you initially tag the release, all three workflows (GitHub, AWS, and Azure) will kick off, and the GitHub repository publish should work since it requires no setup. If you don’t want to publish to GitHub then you should cancel the workflow. Once the workflows have triggered, disable any of the workflows that won’t be used or that you haven’t configured the secrets for so they won’t trigger on future tags. Creating the tag to trigger the release is easy to do with the Draft a new release button on the Releases page for the CAS forked repository.

None of these private repositories are free although they may have a free tier. I have run my tests against GitHub as someone with a GitHub Pro subscription which comes with 2GB of Packages storage. After that it claims to charge $0.25/GB/month and that storage may be shared with GitHub Actions artifacts and logs. CAS publishes many modules so 2GB of storage may not hold many versions. GitHub Packages storage may be free for public repositories. You can purge all versions of your CAS packages with a script like this, which needs to live at root of CAS project:

More targeted deleting could be done with a more involved script.

The GitHub Packages repository can be used with no setup because you already have a CAS fork in GitHub and workflows in your fork can publish packages by default. Unfortunately the GitHub Package Repository workflow gets errors like the following on random published files:

It also fails to publish the CAS shell jar, with a 400 error, possibly because it is too large, but it is not much larger than the CAS Tomcat webapp war which publishes fine.

Since CAS publishes so many files, it is highly unlikely that a full release will be successfully published until the issue with GitHub is resolved. I am assuming the issue is on the GitHub side because these errors don’t show up when publishing to other repository types. CAS publishes over 400 modules and each module includes resources, tests, sources, javadoc jars, the main artifact and a gradle module file, each of which has four hash files (md5, sha1, sha256 and sha512), so you are talking about enough files getting published to have at least one 409 Conflict error and that is enough to kill the build.

By skipping the CAS shell jar, which doesn’t work due to 400 Bad Request error, for GitHub Package Repository only, and reducing the number of artifacts published per module to only include the main artifact (skipping source, resource, javadoc, and tests), publishes to GitHub Package Repository did succeed three times, followed by five failures, and then two more successes in three tries. For now, it seems to fail slightly more than half the time which is not reliable enough to use. I plan to open an issue with GitHub, so hopefully they can fix it, given a reliable way to recreate the problem. Publishing to GitHub often fails when publishing small files such as an md5 hash file. One would think that they could compare the contents of the file they are adding with the file that already exists for some reason and not return a 409 if the file being PUT was identical to what was there.

Publishing to an AWS Code Artifact repository has so far been very reliable (no failures). It requires more setup and configuration but is not difficult if you already have an AWS account and are familiar with setting up security policies.

Azure Artifacts seems to be reliable and is easier to setup than AWS CodeArtifact. When you create an Azure Devops account you will get an organization and within that organization you can create a project. Inside the project, under settings, you can enable the Artifacts service. Inside the Artifacts service you create a “feed” which just needs a name. The feed has some settings related to visibility (organization or specific members) and scope (project or organization), and whether it should pull from dependencies from upstream sources. The feed can handle many types of dependencies, not just Maven.

Once you have created the feed, click Connect to Feed and choose Gradle and it will show a build script example on how to connect. Oddly it shows using a Maven settings.xml file to set the username/password for the Gradle Maven repository, but you can ignore that since CAS has a workflow that works with Azure Artifacts and it doesn’t use a settings.xml file. On the “connect” page, note the URL of the maven repository and the username. There will be a link for creating a personal access token which will you will need to configure as a secret on your CAS fork in GitHub. The personal access token seems to require an expiration date, but it just needs to have the Package (read & write) permissions.

The Azure Artifacts workflow requires the following secrets which you can create using the URL, username and personal access token for the password.

When building your local CAS overlay project and using your personal tag from your private repository, make sure you are using a recent version of the overlay or a recent version of the CAS Initializr which has support for using a private repository if the URL and username properties are set as properties and the password is defined in an environment variable.

Set the following properties in your ~/.gradle/gradle.properties using the URLs and username for your AWS CodeArtifact or Azure Artifacts repositories:

For the AWS CodeArtifact repository you will need to set the repository password in the environment with something like:

For the Azure Artifacts repository you set PRIVATE_REPO_TOKEN to person access token.

Then run the build referencing the tag used to publish your private CAS build:

The AWS CLI needs to be installed and configured with access keys for a user with sufficient rights to use the repository. If the repository is not in the default region specified in your config, include the region on the command line, e.g. --region us-east-2. In the case of Azure Artifacts, the PRIVATE_REPO_TOKEN would be set to a personal access token. 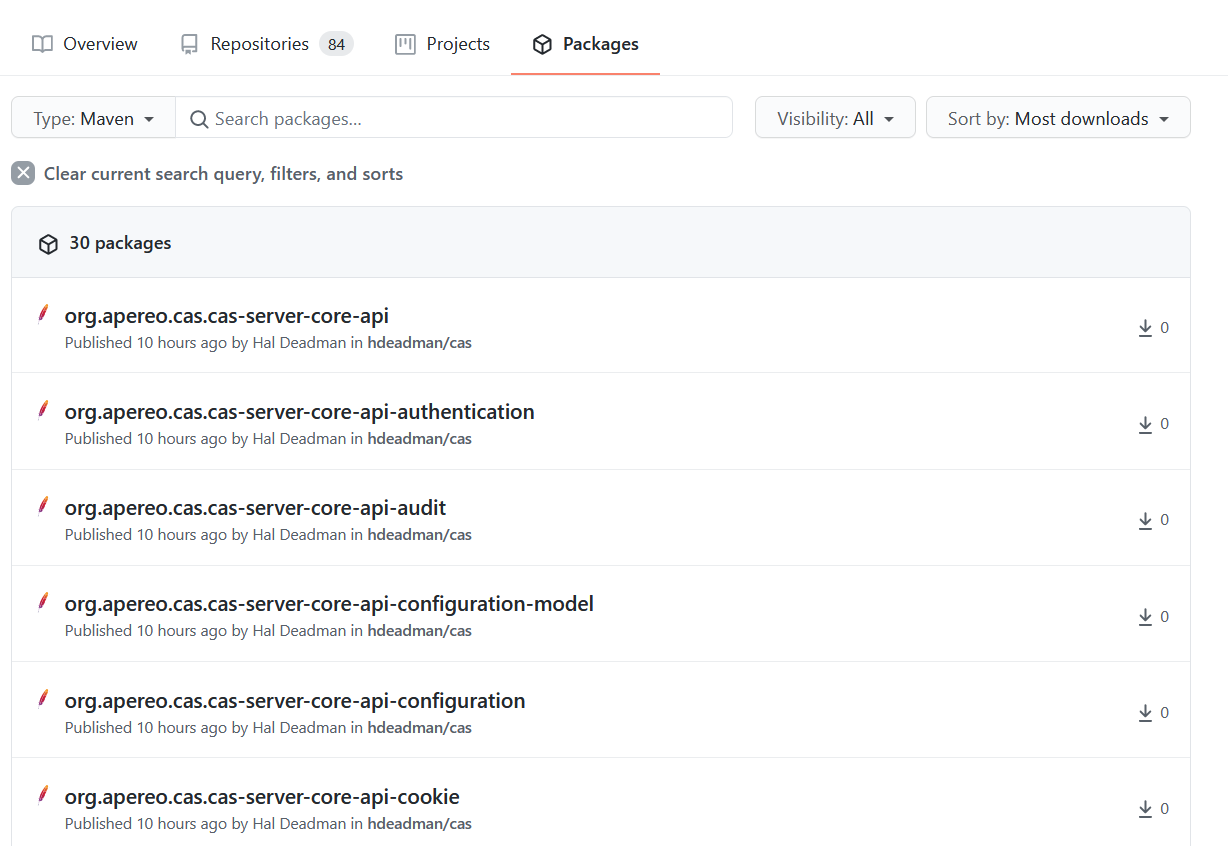