The official CAS 5.1.0 GA was released on May 27th 2017. Since then, the project has been moving forward with development of the next feature release that is tagged as 5.2.0. This post intends to highlight some of the improvements and enhancements packed into the third release candidate in the 5.2.0 series.

You can read more about the previous release candidate here.

We strongly recommend that you take advantage of the release candidates as they come out. Waiting for a GA release is only going to set you up for unpleasant surprises. A GA is simply a tag and nothing more. In order to start experimenting with release candidates, use the following strategies.

At any given time, you should be able to append -SNAPSHOT to the CAS version specified in order to take advantage of snapshot builds as changes are made and published.

In the pom.xml of the overlay, adjust the following tag to match below:

In the gradle.properties of the overlay, adjust the following tag to match below:

Huge thanks to @tsschmidt, the CAS management web application is given an entirely new facelift and redesign using Material UI and Angular 4 based on Typescript. Aside from the fantastic new looks, the application is now able to support and handle most if not all of the configuration knobs and tweaks one can apply to a given service definition. This is a huge milestone allowing for a more solid foundation to start building much fancier integrations and features, such as auto-expiring services, approval workflows and more.

Here are a few sample screenshots: 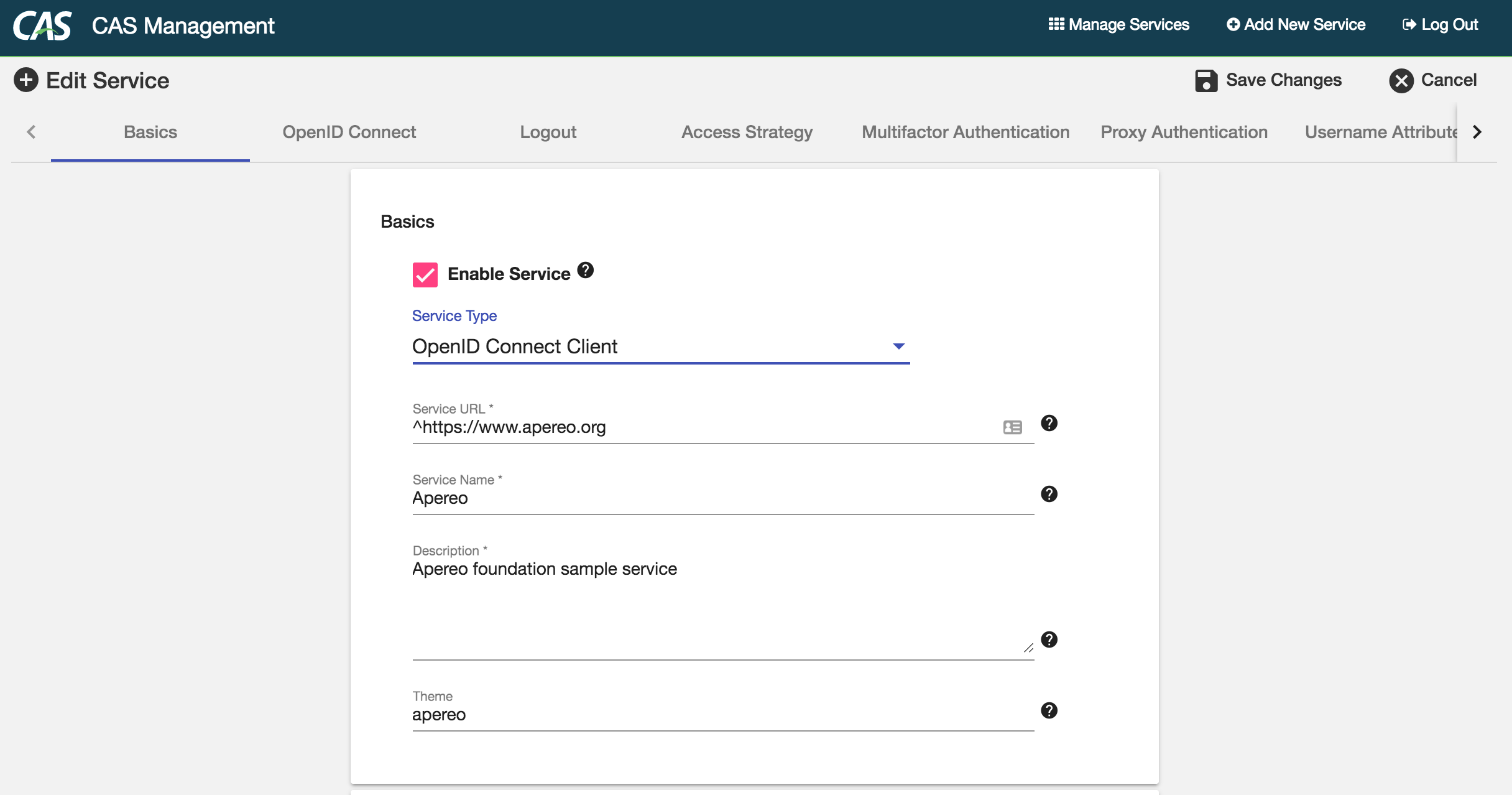 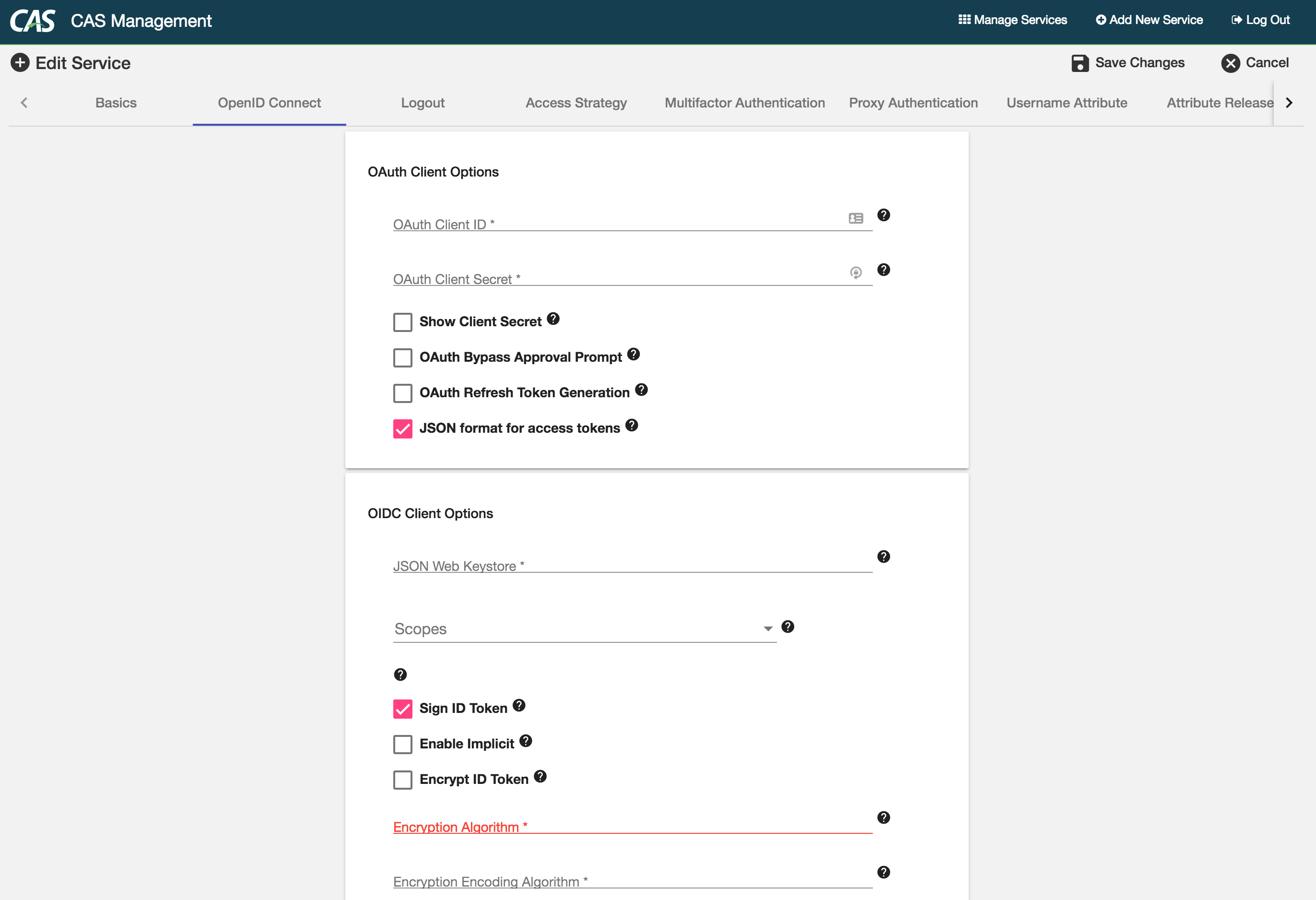 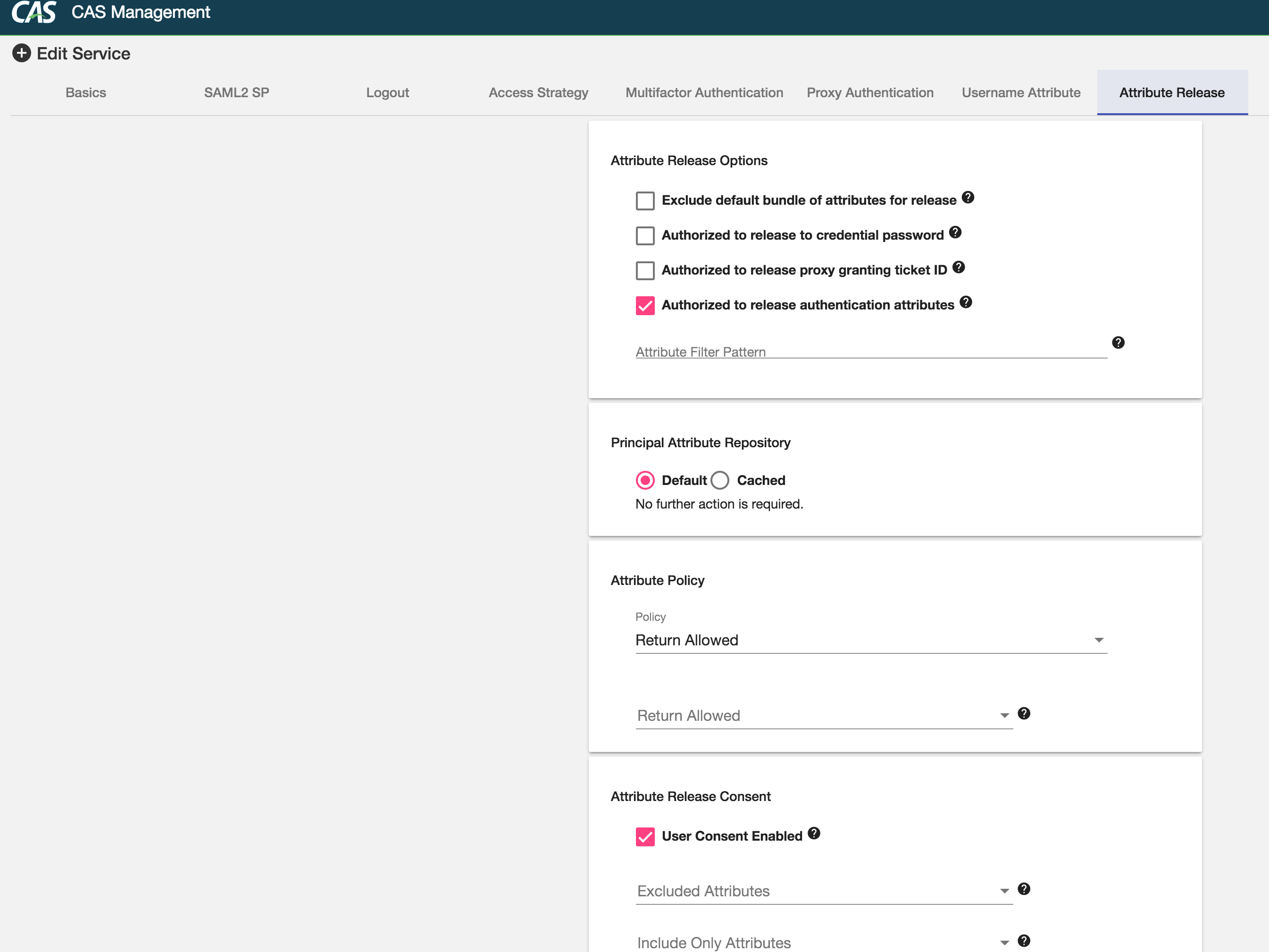 CAS authentication events now gain the ability to use InfluxDb for storage.

Most if not all internal caching strategies and policies have switched from using the Guava library to Caffein. This is for the most part an invisible change, yet the swich allows CAS to dictate more granular expiration policies for caches that apply to each individual entry in the cache, rather than the cache itself as a whole.

A number of new SAML2 service provider integrations are added to settings that include New Relic, Egnyte and more.

A new monitor is now included that is able to report back status and statistics on a MongoDb instance.

The Ehcache monitor is now improved to ensure it can work correctly with its ticket registry, taking into account caches created dynamically by the ticket catalog.

The configuration of the memcached monitor is now moved into a separate block in order to leverage and provide support for connection pooling.

CAS has the ability to pause and interrupt the authentication flow to reach out to external services and resources, querying for status and setings that would then dictate how CAS should manage and control the SSO session. Interrupt services are able to present notification messages to the user, provide options for redirects to external services, etc. A common use case of this functionality deals with presenting a bulletin board during the authentication flow to present messages and announcements to select users and then optionally require that audience to complete a certain task before CAS is able to honor the authentication request and establish a session.

See this guide for more info.

Thanks to @astohn, JMeter scripts for performance and stress testing CAS are now available.

Thanks to @arbner, attribute consent gains a new storage option to save decisions in LDAP. See this guide for more info.

Handling attribute consent now takes on a more wholesome API approach where there exists a consentPolicy that can dictate how attribute are selected and qualified for consent. See this guide for more info.

A new storage option is now added to include support for MongoDb. See this guide for more info.

The structure of a consent decision is changed to rename the field date to createdDate, in to avoid collisions when the storage option is one of JDBC where date is considered a reserved keyword. You may need to readjust the schema manually in order to have CAS recognize existing records.

See this guide for more info.

Attribute release policies gain a small setting to control whether the application is authorized and allowed to receive authentication/protocol attributes. See this guide for more info.

Additionally, some foundational work is done to allow for parsing of requested scopes so they can later be mapped to attribute and claim release policies.

Support for revoking OpenID Connect access/refresh tokens is now included in this release.

An additional authentication policy is now provided that can prevent an authentication event, if the user has already logged on and has a session with CAS.

In refactoring a number of configuration classes that deal with MongoDb settings, the MongoDb service registry is changed slightly to use a collection property rather than collectionName in order to keep things consistent across all settings. Similarly, a number of property placeholders have changed from mongodb to simply just mongo in order to again ensure a consistent naming strategy is used everywhere.

Surrogate authentication (Impersonation) gains the ability to dictate an expiration policy assigned to a surrogate session. Additionally, surrogate account storage and querying can now be done via a REST resource as well. Access strategies for impersonation are also improved to allow per-service authorization rules.

Note that the baseline module to include in the overlay has changed in this release candidate to clearly separate core and webflow functionality. Consult this guide for more info.

Device registration records for FIDO U2F may now be saved inside a MongoDb instance.

Audit logs are now given the ability to store audit records inside a MongoDb database.

AUP support gains the ability store decisions via JDBC and REST. Note that the baseline module to include in the overlay has changed in this release candidate to clearly separate core and webflow functionality.

The registry has long carried the behavior to execute blocking ticket operations. In this release candidate, the registry switches to a more asynchronous model to gain maximum performance.

Memcached client instances are now pooled and during ticket registry operations are borrowed from and then returned to the pool in order to ensure maximum performance.

A new service registry implementation based on Redis is now available.

Federation Interoperability Profile
The CAS project strives to conform to the SAML V2.0 Implementation Profile for Federation Interoperability. An evaluation of the requirements against the current CAS release is available here. It is RECOMMENDED that you view, evaluate and comment on functionality that is currently either absent or marked questionable where verification is needed.

SAML2 capabilities of CAS in this release provide support for the following:

SAML2 capabilities of CAS in this release add support for the Artifact Resolution profile. See this guide for more info.

SAML2 capabilities of CAS in this release add support for the Attribute Query profile. See this guide for more info.

SAML2 capabilities of CAS in this release add support for the POST SimpleSign profile. See this guide for more info.

A big hearty thanks to all who participate in the development of this release to submit patches, report issues and suggest improvements. Keep’em coming!